Johannesburg City Day Tour offers an insight into the history as well as a view of the modern Johannesburg. Come and experience the “Jozi” atmosphere.

Johannesburg also known as Jozi, Jo’burg or eGoli, is the largest city in South Africa. Johannesburg is the provincial capital of Gauteng, the wealthiest province in South Africa, having the largest economy of any metropolitan region in Sub-Saharan Africa. The city is one of the 40 largest metropolitan areas in the world, and is also the world’s largest city not situated on a river, lake, or coastline.

While Johannesburg is not officially one of South Africa’s three capital cities, it does house the Constitutional Court – South Africa’s highest court. The city is the source of a large-scale gold and diamond trade, due to its location on the mineral-rich Witwatersrand range of hills. Johannesburg is served by O.R. Tambo International Airport, the largest and busiest airport in Africa and a gateway for international air travel to and from the rest of southern Africa. More recently Lanseria International Airport has started international flights and is situated conveniently on the opposite side of the metropolis.

On this city tour we will discover this “city of gold” as well as the surrounding areas. The following is a possible route that we will follow for this well informed tour:

The duration of this tour is between 2.5 hours to 3 hours and departs either at 08H00 or 13H00. The pick-up point for this tour is any hotel or residential address in Johannesburg. Alternative pick up location can be arranged

* The tour might deviate according to traffic and time available. 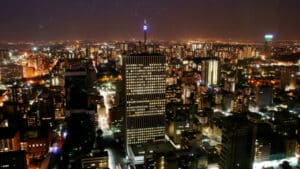